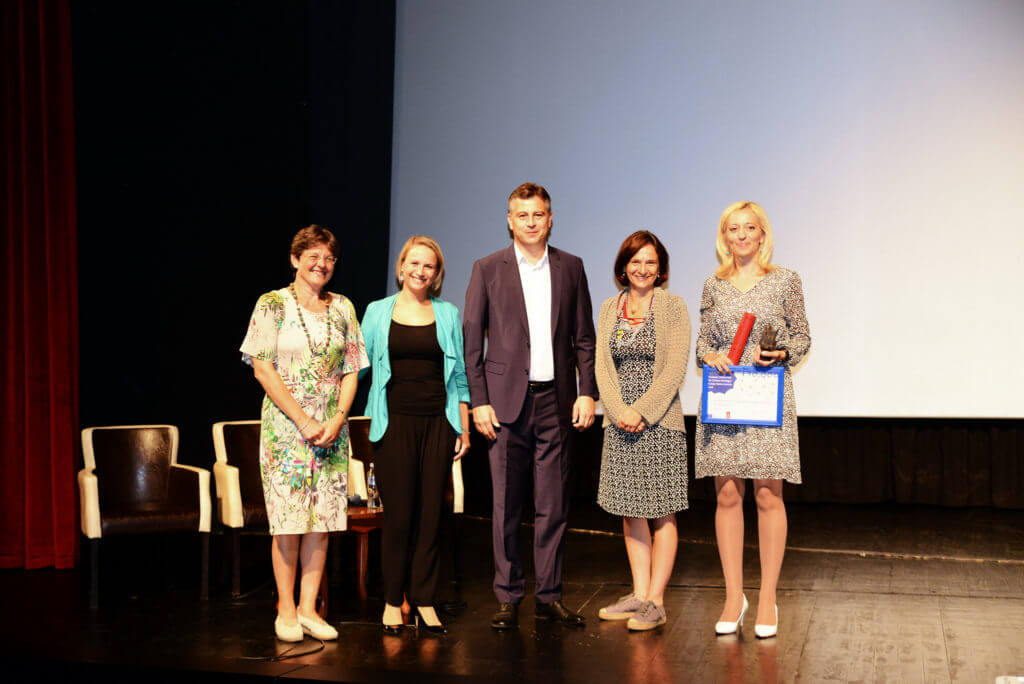 First ever Grand Prix of the European Heritage Awards in Serbia

The Grand Prix of the EU Prize for Cultural Heritage / Europa Nostra Awards was presented in Serbia for the first time to the Conservation Study of the Village Gostuša in Pirot District on 31 August 2016. Around 100 heritage and cultural professionals, volunteers and supporters, and several representatives from regional, national and European institutions, gathered at the Cultural Centre of Pirot to celebrate this outstanding heritage achievement in Serbia. Sneška Quaedvlieg-Mihailović, Secretary General of Europa Nostra, Nadežda Dramićanin, from the EU Delegation to Serbia, Elena Vasić Petrović, Director of the Institute for Cultural Heritage Preservation Niš and author of the award-winning research project, Vladan Vasic, Mayor of Pirot, and Vesna Marjanović, Member of the Serbian Delegation to the Parliamentary Assembly of the Council of Europe and Vice-Chair of the Culture Committee of this Assembly, addressed the audience.

Sneška Quaedvlieg-Mihailović, Secretary General of Europa Nostra, praised this exemplary research project and launched a strong appeal for the rehabilitation of the exceptional rural settlement of Gostuša.

“Gostuša today is like a sleeping beauty beginning to awake thanks to the knowledge, love and hard work of the team of experts, both junior and senior, gathered by Elena Vasić Petrović, and due to the increased attention given to it by local, national and European bodies. This is the moment to join forces at all levels to make the revitalisation of Gostuša an example for other old rural settlements that combine nature and culture, which abound in Serbia and the entire Balkan region. All of us have a special responsibility, so I call on the City of Pirot, the Republic of Serbia and the European Union – particularly our partners, the European Commission – and its Member States, and other interested countries to work together to rehabilitate this exceptional village following the best practices in Europe,” stated Sneška Quaedvlieg-Mihailović.

Referring to the European Commission’s proposal for the European Year of Cultural Heritage 2018 published the previous day, the Secretary General of Europa Nostra affirmed: “This is a landmark decision for the European Union at a time when it is faced with such difficult challenges. Heritage helps us to build bridges between generations, communities, individuals, cultures and nations. Europa Nostra and I hope that Serbia will also take advantage of this historic opportunity to protect its exceptional cultural and natural heritage and give it much higher priority in its future strategy of sustainable development. We want the village of Gostuša to become one of the symbols of the European Year of Cultural Heritage through the successful revitalisation of a number of houses, the development of cultural and ecological tourism and the involvement of the wealth of talented young people in this country and throughout Europe”.

Prior to the presentation of the Grand Prix, Elena Vasić Petrović and Ivana Cvetković, Associate at the Institute for Cultural Heritage Preservation Niš, talked about the award-winning project and the outcomes of the workshops held during the previous days. Višnja Kisić, Secretary General of Europa Nostra Serbia, presented the key findings of the European Policy Report ‘Cultural Heritage Counts for Europe’. This extensive Report – recently produced by Europa Nostra together with five partners – provides compelling evidence of the value of heritage and its positive impact on Europe’s economy, culture, society, and the environment. The programme ended with the opening of the exhibition ‘Gostuša Village’.

Guided tours of Gostuša and the surrounding areas took place on 28 and 30 August. A series of workshops and lectures on key topics related to the award-winning Conservation Study were held on 29-30 August in Dojkinci village with the participation of experts from the Institute for Cultural Heritage Preservation, the Institute for Natural Heritage Conservation, the Ministry of Civil Engineering, Transport and Infrastructure, the Tourism Organisation of Serbia, the Tourism Organisation of Pirot, NGOs and the University of Niš as well as local authorities and representatives from the local community.

The Conservation Study of the Village Gostuša was declared a Grand Prix laureate and received €10,000 at the European Heritage Awards Ceremony held on 24 May 2016 at the Zarzuela Theatre in Madrid, Spain. This major event was co-hosted by Maestro Plácido Domingo, President of Europa Nostra, and Tibor Navracsics, European Commissioner for Education, Culture, Youth and Sport.

The ceremony in Pirot was organised by the Institute for Cultural Heritage Preservation Niš and the City of Pirot, in collaboration with European Commission and Europa Nostra and with the kind support of the Cultural Centre of Pirot, the Tourism Organisation of Pirot and the Foundation Architect Aleksandar Radović.